Adinkra
Its origin is traced to the Asante people of Ghana and the Gyaman people of Cote' d'lvoire (Ivory Coast).
However, the production and use of Adinkra have come to be more associated with the Asante people than any other group of people. Around the 19th Century, the Asante people developed their unique art of adinkra printing. Adinkra cloths were made and used exclusively by the royalty and spiritual leaders for very important sacred ceremonies and rituals. First Adinkra symbol: 4 t. Epa(handcuffs)  "Onii a n epa da wo nsa no, ne akowa ne wo." You are the slave of him whose handcuffs you wear...

Below are some examples of Adinkra symbols 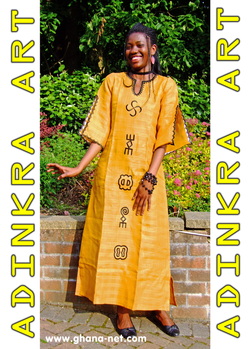 In modern times, however, Adinkra cloths are used for a wide range of social activities. In addition to its sacred usage, it is also used to make clothing for such special occasions as festivals, church-going, weddings, naming ceremonies and initiation rites.

Each of the motifs that make up the corpus of adinkra symbolism has a name and meaning derived either from a proverb, a historical event, human attitude, animal behavior, plant life, forms and shapes of inanimate and man-made objects.

These are graphically rendered in stylized geometric shapes. Meanings of motifs may be categorized as follows: Aesthetics, Ethics, Human Relations and Religious concepts. In its totality, Adinkra symbolism is a visual representation of social thought relating to the history, philosophy and religious beliefs of the Akan peoples of Ghana and Cote' d'lvoire.

Your Comments are important, to us!

Click on each of the Adinkra symbols, to read the meaning. (Akan and English) Feel free, and contact us, with any comments about!

About Adinkra  -
MEANINGS OF SYMBOLS IN ADINKRA CLOTH by Kwadwo Boahene
* If you have any comments or corrections, please contact us! (ghananet-net@hotmail.co.uk). Many Thanks!

MEANINGS OF SYMBOLS IN ADINKRA CLOTH

GYE NYAME (Except God).
Symbol of the OMNIPOTENCE OF GOD. Prov. Abode santan yi firi tete: obi nte ase a onim n'ahyase, na obi ntena ase nkosi n'awie, Gye Nyame. (This Great Panorama of creation dates back to time immemorial, no one lives who saw its beginning, no one will live to see its end, Except God).

ADINKRA SYMBOLS (NYAME NWU NA MAWU)NYAME NWU NA MAWU (God does not die, and so I don't die).
Symbol of the OMNISCIENCE AND OMNIPRESCENCE OF GOD and of the INFINITY OF MAN'S SOUL, and also of ANTIQUITY.

SANKOFA (Go back to fetch it).
Symbol of the Wisdom in LEARNING FROM THE PAST in building for the future. Prov. "Se wo were fi na wo sankofa a yenkyi". (It is not a taboo to go back and retrieve it you forget.)

DWENI NI MMEN (Ram's horns).
Symbol of STRENGTH (of mind, body and soul) and HUMILITY. Prov. "Dwenini ye asisie a ode nakoma na ennye ne mmen" (The ram may bully, not with its horns but with his heart.)