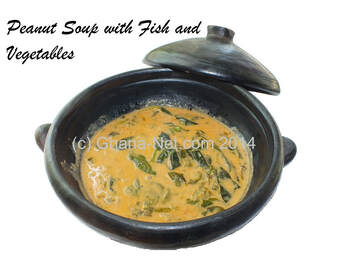 Boil chicken with ginger and the onion half, using about 2 cups water. Meanwhile, in a separate large pot, fry tomato paste in the oil over low heat for about 5 minutes.

Add to the paste the chopped onions and tomatoes, stirring occasionally until the onions are clear. Remove the partially-cooked chicken pieces and put them, along with about half the broth, in the large pot. Add the peanut butter, salt and peppers.

Cook for 5 minutes before stirring in the eggplant and okra. Continue cooking until the chicken and vegetables are tender. Add more broth as needed to maintain a thick, stewy consistency.
The typical Ghanaian staples in the south include cassava and plantain, FuFu, Kinkey and Bankou.

In the northern parts of the country, their main staples include millet and sorghum. Yam, maize and beans aroused across the country as staple foods.
Crops such as peanuts and Coco-Yam are also important in the local cuisine.
With the advent of modernization and colonialism, imported crops such as rice and wheat have been increasingly incorporated in Ghanaian cuisine.
Important Health Tip: Any vegetable oil is to be consumed raw or extra virgin. Cold pressed and fresh, never refined. They should not be used for cooking at all. For cooking use only coconut oil, palm oil or butter.
Back To Home Page (All Ghana Links & Info)
Food Health - Interesting websites (external): http://doctorgenao.com/2011/04/03/dangers-of-vegetable-oils/ *