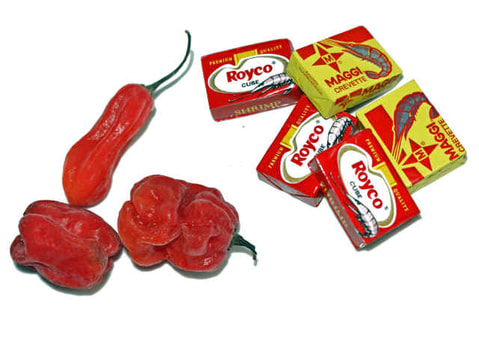 Palm oil  - half a cup (Or vegetable oil, if nothing else to hand)
1 can crushed tomatoes. But you may use fresh tomato's as well.
1 scotch bonnet pepper (a habanero does the same job too).. careful though, those peppers are very HOT. Don`t get them into your eyes! pieces to taste
1 Maggi cube. Might be vegetable or chicken. Best is fish cubes.
1 pink onion(chopped)
Garlic and Ginger (For an even better taste)

Pour the Palm oil in to a pan, stir in the chopped onion and garlic, till onion turns translucent). Make sure, that the Palm Oil is not burning!
Add the cut tomatoes and scotch-bonnet pepper. (Cut the pepper in halves, it releases the flavor better, but be careful not to eat the pepper, if you are not used to that kind of HOT).

Let all simmer till the oil rises to the top.
This sauce is the basic tomato sauce that can be used for different recipes, going with rice and chicken, plantains etc.
Add the crumbled spices to to sauce and let simmer for 5 minutes, stirring to prevent burning.
Serve with the boiled plantains!
The typical Ghanaian staples in the south include cassava and plantain, FuFu, Kinkey and Bankou.

In the northern parts of the country, their main staples include millet and sorghum. Yam, maize and beans aroused across the country as staple foods.
Crops such as peanuts and Coco-Yam are also important in the local cuisine.
With the advent of modernization and colonialism, imported crops such as rice and wheat have been increasingly incorporated in Ghanaian cuisine.
Important Health Tip: Any vegetable oil is to be consumed raw or extra virgin. Cold pressed and fresh, never refined. They should not be used for cooking at all. For cooking use only coconut oil, palm oil or butter.
Back To Home Page (All Ghana Links & Info)
Food Health - Interesting websites (external): http://doctorgenao.com/2011/04/03/dangers-of-vegetable-oils/ *