West African History - ​Anton Wilhelm Amo is the first African (Known) to earn a degree from a (German) University, (Halle) 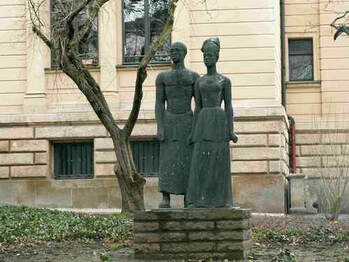 African philosopher and educator, who was raised in Germany and taught in several universities there before returning to his native country, (Gold Coast * today Republic of Ghana).
​Anton Wilhelm Amo

Amo was the most important African philosopher in Europe in the 18th century. By his own example, Amo broke racial prejudices and promote the values of the Enlightenment.

"The eighteenth-century African philosopher from Ghana, Anthony William Amo, who taught in the German Universities of Halle, and Wittenberg, pointed out in his De Humanae Mentis Apatheia that idealism was enmeshed in contradictions. The mind, he said, was conceived by idealism as a pure, active, unextended substance. Ideas...
The alleged constituents of physical objects, were held to be only in the mind, and to be incapable
of existence outside it.

Amo's question here was how the ideas, largely those of physical objects, many of which were ideas of extension, could subsist in the mind; since physical objects were actually extended, if they were really ideas, some ideas must be actually extended. And if all ideas must be in the mind, it became hard to resist the conclusion that the mind itself was extended, in order to be a spatial receptacle for its extended ideas."
(Kwame Nkrumah in Consciencism, 1964)

Anton Wilhelm Rudolph Amo was born in Awukenu, a small village near Axim, in western Ghana.

The Axim region, where his family lived, was in Dutch hands, trading in gold and slaves. Amo was of the Nzema people, known for their strong, unique culture.

Soon after his arrival, Amo was turned over to the German Duke Anton Ulrich Brunswick-Wolfenbüttel,
a philanthropist, novelist and composer, and the brothers Wilhelm August and Ludwig Rudolp. The dukes, his protectors, had Amo baptized in the Saltzthal Chapel of Wolfenbüttel Castle in 1708 and renamed him after themselves.
In 1721 in a ceremony at the chapel, he was called "Anton Wilhelm Rudolph Mohre". In his scholarly work, Amo himself preferred the name Antonius Gvilielmus Amo, Afer of Axim.
His studies Amo wrote in Latin, which was the international language of learning. In addition to mastering Latin, Greek, Hebrew, and French, Amo also spoke fluently German, English, and Dutch.

Amo grew up in the Duke's castle in Lower Saxony. Although it was the fashion to have blacks servants, Amo was educated as a nobleman.
With the financial help of his supporters, Amo acquired a classical education and religious training at the Wolfenbüttel Ritter-Akademie and at the University of Helmstedt, which he attended to qualify for postgraduate studies. In 1727 Amo entered the University of Halle, an intellectual centre of the German Enlightenment, where he studied law.
Amo was the first African student at the University.
In Halle, he became acquainted with the thoughts of such philosophers as Christian Thomasius, who had helped to found the University, Christian Wolff, a hero of freedom of thought, and René Descartes, on whose writings
he published a study.
Amo received his doctorate in philosophy on October 10, 1730. He then studied physiology, medicine and pneumatology (psychology) at the University of Wittenberg, receiving a degree in medicine and science in 1733.
In his address the Rector of the University, emphasized the high regard Amo held in academic circles and said that the work proved that Amo's intellectual ability was as great as his powers of teaching.

Amo was after the poet and scholar Juan Latino (1516-c.1595), born probably in Guinea, the second African who lectured in European universities, and the first black professor in Germany.
He taught at the universities in Halle, Wittenberg, and Jena. At Halle he lectured on the political thought of Christian Wolff, who had been forced to leave the university in 1723 by the Halle Pietists and King Frederick William.

The original manuscript of his first work, "Dissertatio Inauguralis De Jure Maurorum"
in Europa (1729), is lost, but it concerned the rights of Africans in Europe. (In German, the word "Mohr" did not just mean "Moor" but was used to describe dark-skinned Africans.)
A bried summary of the text was published in the Annals of the university. Amo's "inaugural dissertation", which was directly related to his being an African, earned his candidature in both private and public law. He argued that African kings, like their European counterparts, had been vassals of Rome.
By slave trade, Europeans were violating the common heritage of Roman law, the principle that all the Roman citizens were free, including those who lived in Africa.

In 1734 Amo published his second doctoral dissertation, De Humanae Mentis "Apatheia"
(On the Absence of Sensation in the Human Mind), a critique of Descartes's dualism, the opposition between mind and body, which he found problematic. Amos did not reject the assumption that the mind is a substance, but suggested, that there was inconsistency and confusion in Descartes' terms - how two fundamentally different substances can be in union.
Taking an agnostic stand, Amo also argued, that "Although I do not know in what manner God and disembodied spirits understand themselves and their operations and external things,
I do not think it probable that they do it through ideas." According to Amo, "it is the peculiarity of the human mind that it understands and acts through ideas, because it is very closely tied to the body."

Descartes, who had died in 1650, was not just any thinker, but a towering figure in European philosophy and mathematics, which perhaps was one of the reasons why Amo decided to deal with the subject. However, Amo's remarkable study did not mark the beginning of a philosophical dialogue between Europe and Africa.
His dialogue with German philosophers remained culturally more significant.

Amo's third major publication was "De Arte Sobrie et Accurate Philosophandi" (1736, Treatise on the Art of Philosophizing Soberly and Accurately), which runs to 208 pages. Part of the book was devoted to prejudices.

Amo moved in 1739 to Jena, where he taught at the university.
Jena was a seat of Wollfianism, and Amo lectured among others on "the refutation of superstitious beliefs".
During the early years of the reign of Frederick II of Prussia, Amo was invited to the court in Berlin as a government councilor. Amo was also elected a member of the Dutch Academy of Flushing.

Amos played an important role in raising awareness of the wrongness of slavery.
In Germany, the Bradenburg-African Company, established in 1682, was engaged in the slave trade. However, before the forming of the German Empire in 1871, there were not many Africans even in Berlin.

Although Amo had close friends, including Moses Abraham Wolff, his student at Halle, and the young Gottfried Achenwall, who became a famous statistician, he still remained an outsider in whatever city he lived. In the Annals of Halle, he was described as "the Master Amo, who hails from Africa and more particularly from Guinea, and is a genuine Negro but a humble and honourable philosopher".
Possibly disenchanted by the racism and discrimination he had experienced and witnessing increasing unsympathy toward liberal ideas, Amo sailed in 1747 to his native Ghana.
According to some sources, he returned as a passenger on a slave ship. Amo settled in the Axim area, where his father and one sister were still living. In 1753 he was visited by David Henri Gallandet, Swiss-Dutch physician and ship's surgeon, who noted that Amo lived like a hermit.
According to a report, he was moved by the Dutch in the 1750s to Fort San Sebastian in Shama.
It has also been alleged that he worked as a goldsmith.
Little is know of Amo's later years in Ghana and his literary work, that he might have done. Amo died probably in Shama in 1759.

Amo's work fell into oblivion in Germany for a long period. In France he was mentioned in Abbé Grégoire's book
De la littérature des Nègres (1808) as one of
"all those courageous men who have pleaded the cause of the unhappy Blacks and half-breeds, either through their writings or through their speeches in political assemblies, and to societies established for the abolition of the slave trade, and the relief and liberation of slaves."
In 1965, a statue in Amo's honor was erected in Halle and his studies were published in 1968 in German and English editions in Halle by the Martin Luther University of Halle-Wittenberg. The university has also established an annual Anton Wilhelm Amo Prize.

Paulin J. Hountondji has argued in
The Struggle for Meaning: Reflections on Philosophy, Culture, and Democracy in Africa (2002), that Amos scholarly work in Germany "could only be a part, from beginning to the end, of a non-African theoretical tradition that ...
... exclusively belonged to the history of Western scholarship". Amo lived most of his active life in Europe, where he had a notable academic career, but his oeuvre has been considered also as a part of the history of African philosophy.
​For further reading: